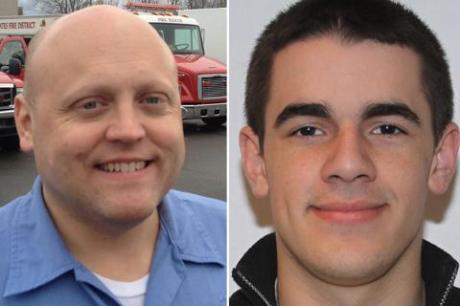 Our prayers go out to the West Webster Fire District volunteer firefighters that lost their lives or were injured in a senseless act of cruelty. These brave souls were attacked while serving their community. Please remember these volunteers and their families that are dealing with great loss at a time that is normally joyful and peaceful. Rest in peace brother firefighters.

Lt. Michael Chiapperini, 43, had been named Firefighter of the Year just two weeks ago, and he led the fire department’s Explorer program for young people interested in becoming firefighters. He had recently taken vacation time to help recovery efforts after Hurricane Sandy, the Rochester Democrat and Chronicle reported. He also was the public information officer for the Webster Police Department. He is survived by his wife, two daughters and a son, who also worked with the fire department.

Tomasz Kaczowka, 19, was a 911 dispatcher for Monroe County. He also was a member of the Explorers group that Chiapperini advised, had worked at a fast-food restaurant and had been a member of the fire department for about a year. One of three brothers, he was studying at Monroe County Community College. On his Facebook page, he said he could speak Polish and German.