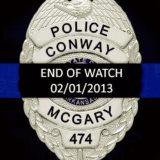 Our prayers go out to the family, seek friends and colleagues of Officer William McGary that died on 2/1/2013.

Public servants continually go into dangerous situations and environments to do the job that must be done.  This occurs so often that the simple acts of going into a burning building, performing a traffic stop, or directing traffic becomes “routine” .  The danger never goes away just because you have done it a hundred times before. Your chances of being injured just increase continually because you have done this a hundred times and will keep doing the job to get it done.  Unfortunately, Police Officer William McGary was fatally injured by a careless driver that struck him while McGary was directing traffic after a vehicle accident at the intersection of Dave Ward Drive and Exchange Street, in Conway