West Pulaski Fire Department would like you to join us in supporting the efforts of the National Center for Missing and Exploited Children.  NCMEC, with the U. S. Department of Justice and many wireless telephone carriers,  has developed a program for free wireless AMBER Alert Notifications to your wireless phone.  Please visit the link below to the organization’s website and sign-up today for a free text message notification when an AMBER Alert is issued in your local area.  Your participation will help find our nations children that are missing or abducted.  Someone’s child needs your help!

END_OF_DOCUMENT_TOKEN_TO_BE_REPLACED

WPFD visited the 2009 Fire Show on October 31, medical 2009 that was presented by the Arkansas Forestry Commission in Greenbrier, Ark.   Firefighters representing departments from all over the state of Arkansas had the opportunity to see fire technology and equipment on display from vendors and departments that implement the tools we use.  WPFD took our Tanker #1 truck to be displayed. Demonstrations were also provided by AIR-EVAC (emergency medical helicopter transport),  chainsaw training,  and more.

END_OF_DOCUMENT_TOKEN_TO_BE_REPLACED 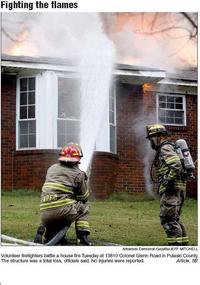 WPFD worked to assist Crystal Fire Department with an active structure fire on Col. Glenn Road on Monday, prescription Oct. 27, buy cialis 2009.  Equipment and manpower were needed from many West Pulaski stations and Alexander Fire Department. The structure was considered a total loss, look however, all occupants escaped without injury.

The Red Cross of Greater Arkansas is helping a father and son after a fire Tuesday afternoon destroyed their home west of Little Rock in Pulaski County, sheriff’s office spokesman John Rehrauer said.

About 2 p.m., a fire broke out at the home at 13816 Colonel Glenn Road while John Cate was inside, Rehrauer said. He was able to get out of the house safely and attempted to put the flames out, but fire engulfed the home, Rehrauer said.

Phillip Cate, who also lives at the address, was not home at the time, Rehrauer said.

No one was injured, Rehrauer said.

The Red Cross is helping the family with housing andbasic necessities.

“We are putting them up for a couple of nights in a hotel and have given them a debit card for emergency purchases,”Red Cross spokesman Brigette Williams said.

The cause of the fire is still under investigation, Rehrauer said.

Follow the link below to read the story from the Arkansas Democrat-Gazette: 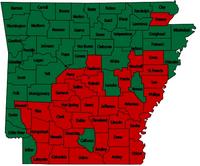 Update :Outdoor Burning Ban is in effect for Pulaski County.  With some recent rains, find burning bans have been lifted in Saline and Perry counties only. Burning is still prohibited in Pulaski county at this time

WPFD would like to remind you that outdoor burning bans are issued by the  judges within each respective county and are not a mere suggestion to restrict burning activities.

Even with some rain in our area, treat we remind you that ?ANY outdoor burning in a county with an active burning ban is PROHIBITED and CAN INCUR FINES from law enforcement agencies as burning is not allowed, discount recreational campfires, grass, trees debris, or otherwise. Burning of non-natural materials is never legal.

More info is available at the link below:

West Pulaski Fire Department held its annual ‘All You Can Eat’ Chicken and Fish Dinner on Saturday, September 26th, 2009. We had a GREAT turnout and it was fantastic to see our friends and neighbors again this year for our annual dinner.  Thank you to everyone that helped sponsor and participate in our event that helps our department so much each year!